“True, some drummers keeping time sound like they’re on autopilot, self-hypnotized, but not the best ones like Billy Drummond. His ride cymbal beat is lively, varied and full of passing cross-rhythms, the sound of a musician fully engaged, hearing and reacting to everything happening around him.” By Kevin Whitehead NPR “Fresh Air” Read/Listen

The Best New Jazz of Summer 2022. “All across this outstanding recording, you can hear three generations of superb improvisers cracking open great tunes and generating life.” By Will Layman PopMatters Read

“Drummond is, arguably, one of the most innovative drummers currently on the NYC scene – which means the world – although, as is their wont, the DB critics didn’t see it in their 2022 poll! They will next year after they’ve heard this!” By Lance Liddle BeBopSpokenHere Read

“This is Drummond’s first album as a leader since 1996, and it’s great.” By  Phil Freeman Stereogum Read

“Valse Sinistre is so good that it almost feels irresponsible. Drummer Billy Drummond and his postbop quartet are not only firing on all cylinders but venturing into such daredevilry that you want to shout, ‘Are you guys insured?'” By Michael J. West JazzTimes Read

“Billy Drummond barrels onto the set with serious energy and wailing sticks dancing on the drum skins.  The Jackie McLean tune is called “Little Melonae” and there’s nothing ‘little’ about the arrangement; it’s huge. The tempo is crazy fast and Micah Thomas let’s his fingers fly over the upper register of the piano like an excited bird.  Drummond’s rhythms propel the tune and by the time Dayna Stephens solos on saxophone, the driving energy is on fire.” By Dee Dee McNeil Musical Memoirs Read

“It is astonishing that Drummond hasn’t made an album under his own name . . .  since 1996’s Dubai, an ass-kicking quartet date  . . . . It is good to have him back as a leader.” By Phil Freeman New York Jazz Record Read

“One of the signal releases this summer.”  Billy Drummond: The Writer’s Drummer Interview by Ted Panken Jazziz Read

“Drummond carefully chose these selections and sequenced them in the way he wanted the album to flow, creating one of the more interesting recordings of the year with these brilliant musicians.” By Jim Hynes Glide magazine Read

“Showcases Drummond’s versatility as timemaster and bandleader, his sonic signature acting as the throughline for every track. The songs may come from various walks of jazz life, but in Drummond’s capable hands, they all sing from the same soul.” By Michael Toland The Big Takeover Read

Valse Sinistre is the lead story in Jazziz magazines Ten Albums You Need to Know.

“A multigenerational project featuring some of the most innovative voices on the scene today and offering a dynamic repertoire, including rarely-heard pieces and a sole original composition intercutting John Coltrane’s harmonic ideas with Thelonious Monk’s melodic leaps and tendencies. By Matt Micucci Jazziz By Matt Micucci Read

“Still thinking like an album artist, he’s making music here that’s made to last and not be deleted when you update your playlist.” Midwest Record Read

“Pitch perfect for taste and spirit, Billy Drummond consummately seals the deal with the snap crackle and pop of stick, cymbal and drum as he urges his fine band on. How they respond is so meaningful it is nothing short of a style evolution . . . ” FIVE STARS By Stephen Graham  Marlbank.net  Read

Jazz Hot (France) Billy Drummond, Freedom of Ideas By Mathieu Perez “Billy Drummond embodies the spirit of jazz in its most demanding, rooted and original.” Read 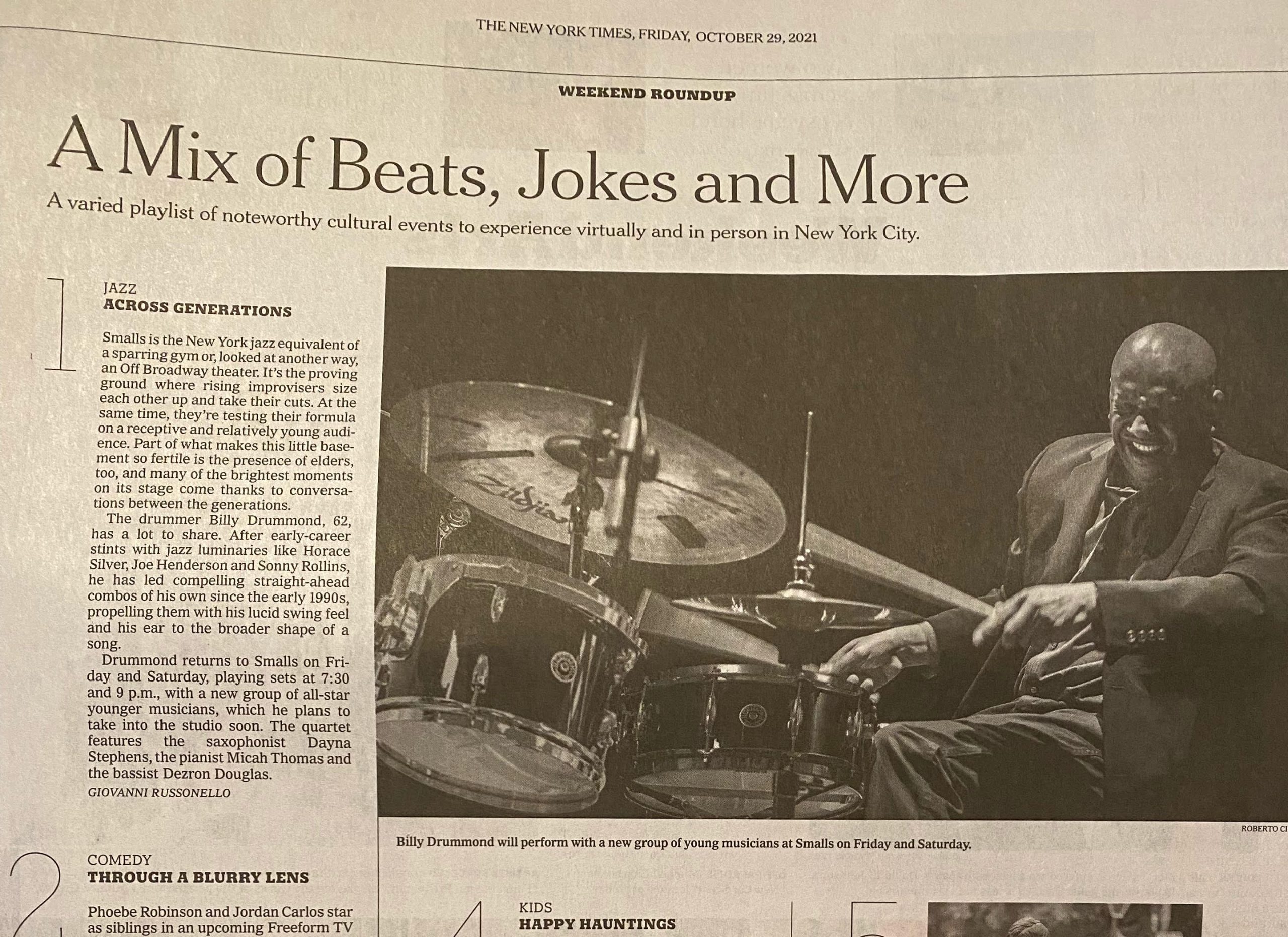 JazzTimes  Overdue Ovation: Billy Drummond, a True Chameleon and Professional By Shaun Brady. “Drummond’s playing has been a dream come true for countless bandleaders over the past three-and-a-half decades. He plays with a quiet authority, akin to the radiant strength of someone who can command the attention of a room without saying a word.” Read

Modern Drummer Dubai is chosen as one of the 50 Crucial Jazz Drumming Recordings of the Past 100 Years “So, is it possible to distill a century’s worth of drumming on jazz recordings, which by any reasonable guess would comprise tens if not hundreds of thousands of titles, down to a list of fifty crucial examples? In a word, no. But you try anyway. ”   Read

Drumhead magazine Interview by Alex Cohen “My neighborhood was blessed with a lot of talented kids that played music, and one family that lived right around the corner from me was the Wooten brothers. We were all best friends at that time.” Read

Regioactive.de – Carla Bley Receives Standing Ovations at Enjoy Jazz, Ludwigshafen [in German] “The second part of the evening sets quite different accents. This is clearly due to drummer Billy Drummond, who enormously enriches the performance and instantly adds a different dynamic and urgency to the music.”   Read

New York Times  The Best Live Jazz Performances of 2017 by Giovanni Russonello “This year, the festival’s weekend marathon brought over 100 bands to roughly a dozen venues across two nights. The best thing I heard [ast Winterfest] was a duo from the pianist Kris Davis and the drummer Billy Drummond.” Read

Jazzdagama Frank Kimbrough, Scott Robinson, Rufus Reid, Billy Drummond: Monk’s Dreams – The Complete Compositions of Thelonious Sphere Monk by Raul Da Gama. “Clearly Mr Drummond appears to be one who would suit a Thelonious Monk Quartet as few drummers would. The drummer’s traversal of this music shows off his inimitable genius as he shares the music’s twists and turns with supple rhythmic flexibility. His approach to Mr Monk’s big-boned and generous space for rhythmic invention is evident in the sense of depth and spaciousness – which we hear on “Little Rootie Tootie”, for instance – that gives the piece an almost orchestral scale as Mr Drummond holds up the rhythmic canvas with brushes and sticks traversing the far corners of his drum set. His penchant for driving the music ever forward makes for exciting twists and turns at all times and we are never prepared for the surprises that often come fast and furious as he dives headlong into the development of a piece with every hint of real abandon on “Brake’s Sake” (Disc Three) for instance. Mr Drummond’s virtuosity is also powerfully and lovingly delivered, creating a glistening delicacy as a foil to the other musicians as he swishes his way through the cymbals and the snares on “Gallop‘s Gallop” (Disc Four). And there is many a high-voltage moment on “Work” and “Hackensack” (Disc Five) all of which are fully redeemed with the other members of the quartet where everything seems right in the sincere and poised accounts of each of the musicians. Read

Downbeat Blindfold Test by Ted Panken A listening test that challenges the featured artist to discuss and identify the musicians who performed on the featured recordings.  Read

New York Times  “Mr. Drummond — aptly, a drummer — plays with quick-thinking focus and forbearance. He can pile on the activity without weighing things down, a rare talent. It will serve him well at Mezzrow, a little basement club that’s better suited for percussion-free combos than it is for drummers. With Donald Vega and Dave Kikoski sharing piano duties, and David Wong on bass, he should have little trouble striking a measured balance; in Mr. Drummond’s hands, the intimacy of the space will become an advantage.” Read

Guardian By John Fordham “Billy Drummond plays superbly throughout. He is exclamatory and insistent on Hip Hop, its theme built out of blippy accents against the percussion, with Bley getting gospelly on it. He quietly whispers behind Sheppard’s long, tremulous tenor notes and Swallow’s purring bass on Tropical Depression – tightly riding the cymbals on the inquisitive, slightly puzzled sounding Red, dramatic on the more abstract, suite-like title track. Four Star review of Carla Bley and the Lost Chords.”

NPR A Blog Supreme Rhythm Runs in the Family: Drummers on their Dads   Read

JazzTimes “Spins jazz on the head of a pin with stunning results.”

Modern Drummer “One of the most crisp, popping, and sensitive drummers around.”

New York Jazz Record “His capacity to spur on each soloist and add color to the ensemble is without equal.”

JazzTimes “This is a solid work that underscores why Drummond is one of the most in-demand players in the business.”  Read

Jazziz “Style and authority . . . masterful use of the melodic and harmonic devices at his drumstick tips.”

AallAboutJazz “Billy Drummond is a powerful and highly musical drummer. He is showcased beautifully in this piano-less quartet setting…Drummond offers his composition as the title track, a middle-eastern sounding line in 7/4 which has the percussionist showing his love for Elvin Jones-esque wailing in support of [Chris] Potter’s soprano sax and more tenor from Weiskopf. The track literally burns… Dubai is worth searching out. Billy Drummond has produced a gem of a recording that offers up the best that jazz has to offer. Great tunes, superb musicianship and something new to hear with each listening. I can’t keep this out of my CD player.” –  Read

New York Times By Ben Ratliff   “Mr. Drummond was especially impressive for not being a regular part of this group. He just explored the trap set for an hour, continually shifting his focus, working on the edges of the cymbals for a while and then the meat of them, altering his combinations between drums, then aligning in swing with Mr. Wonsey and Mr. Washington.”

“. . . one of the hippest bandleaders now at work.” Jim Macnie, DOWNBEAT

“The multi-talented Drummond is a progressive musician. He likes to push the limits of jazz, drawing on its traditions while seeking a vibrant, open-doored present.” – Zan Stewart, NJ Star Ledger

“The most vital element [in Andrew Hill’s Dusk] is the anchoring provided by bassist Scott Colley and drummer Billy Drummond. As valuable as Richard Davis and Tony Williams were to Point of Departure, Colley and Drummond interact with Hill in a similar musical dialogue that is characteristic of true jazz improvisation of the highest order” – Chris Hovan, AllAboutJazz

“One couldn’t envision [Walt Weiskopg’s Siren] without the talents of drummer Billy Drummond. His capacity to spur on each soloist and add color to the ensemble is without equal.” – Chris Hovan, AllAboutJazz

“With his crisp, clear sound and ease of articulation, Billy Drummond is a master drummer who makes his set sing. No wonder greats like Sonny Rollins, Freddie Hubbard and Joe Henderson have sought his services.” – Zan Stewart, NJ Star Ledger

“Drummond has valuable ideas as a leader. For Dubai, he assembled a quartet with a fairly rare configuration; two tenor saxophonists and no pianist…he never settles on one rhythmic pattern for long, always suggesting fresh ideas for his musicians and keeping a loose, open feel to the recording.” – Ben Ratliff, New York Times

“Drummond is one of the most crisp, popping, and sensitive drummers around, and this quartet is a great forum for his style. The ensemble sound is as tight as old school buddies and the soloing is inspired.” – Jeff Potter, Modern Drummer

“Rhythmatist Drummond directs the proceedings with style and authority on Dubai, a two tenor quartet recording which more than adequately highlights Drummond’s refined skills…Drummond makes masterful use of the melodic and harmonic devices at his drumstick-tips.” Jazziz

“Drummond’s tasteful percussion work teasing and prodding instead of relying on volume…One World is a promising debut by a group which will hopefully be around for some time.” – Vinnie Tietro, WHOLE LIFE TIMES

“Let’s face it — some jazz musicians have run the post bop groove into the ground, but the quartet Native Colors offers a fresh approach.” – Calvin Wilson, KANSAS CITY STAR